Next steps for Community Hall Project in Avonwick

The Avonwick and North Huish Community Hall project will report on plans for making the development of a new community hall possible at an open evening being held on April 15th at South Brent Old School Community Centre.

The event follows the success of its £10,000 grant from The Big Lottery's Awards for All scheme to carry out a feasibility study. A residents' survey has since been completed by almost 300 people and the results will be presented on the evening.

Paul Tyler, Chairman of the Avonwick and North Huish Community Hall Project said: "We are delighted with the funding and very pleased with the response from the survey. I hope that people from the North Huish Parish will attend this open evening to hear about the next steps in the project's development.

"At present, there is nowhere for residents to hold events and indoor activities, or for local interest groups to meet, all of which would help build meaningful relationships among neighbours and positively contribute to local village life.

"This project offers a real chance to help build a strong local community for many years to come."

The Avonwick and North Huish Community Hall Project has been gathering pace since a committee, made up of a handful of local residents, was set up less than a year ago, with the support of David Kinross from Devon Communities Together and North Huish Parish Council.

Since then, ideas have been presented to the public from other local community hall projects and an Apple Pie Fair took place on land that has been designated as the site for the proposed new build at Blackhall Lane, Avonwick.

The success of this event helped raise awareness of the project, while gathering ideas from the community to put towards its future plans. It is hoped that the Apple Pie Fair will take place again in 2015.

For more information, news and up to date event details visit www.avonwicknorthhuish.co.uk and sign-up to the newsletter. A community Facebook page has also been set up to post up to date information about the project and share news and views from other local community events at Facebook/AvonwickNorthHuish

Pictured above: Volunteers help to erect a marquee on land designated for a new community hall in preparation for the Apple Pie Fair in September 2014. It is hoped that this fundraising event will take place again in 2015. 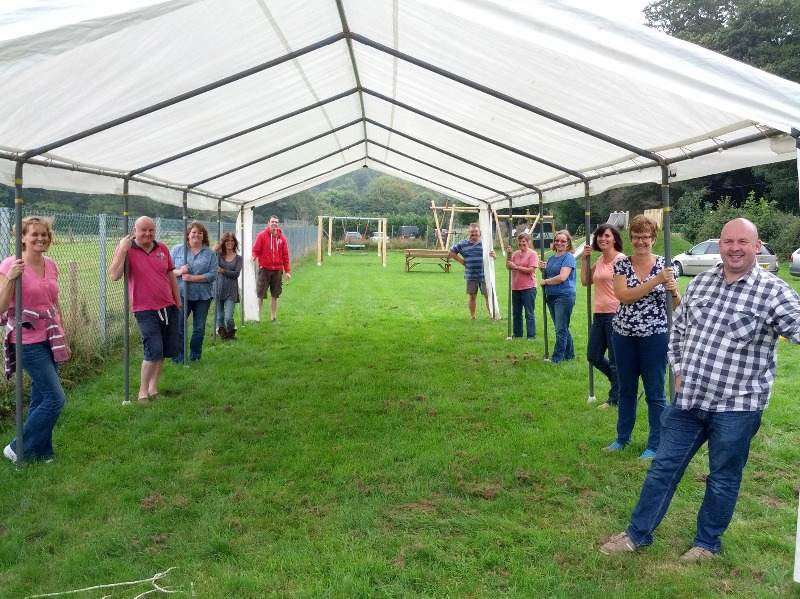 The Avonwick and North Huish Community Hall Project has been successful in a bid for The Big Lottery Awards for All funding of £10,000 to carry out a feasibility study for a new community hall build.

Working closely with David Kinross from Devon Communities Together and support from North Huish Parish Council, residents formed a project committee in April 2014. During the summer with the help of Devon County Councillor Robert Vint's Locality Fund and sponsorship by Luscombe Maye estate agents the project committee carried out a public meeting in June at the Avon Inn beer garden marquee with 48 residents attending to share their views and express their opinions.

To engage people of all ages a new apple pie fair was organised in September with a Big Ideas Apple on Section 106 land available for a new hall as part of Linden Homes housing development in Avonwick, that attracted over 450 people and raised £600 towards the project.

With positive responses from residents and growing support by local volunteers the money awarded by the Big Lottery Fund will support the project into the next crucial stage; a feasibility study!

The Project's Chairman, Paul Tyler said "We are delighted to receive this funding from The Big lottery fund. North Huish is a rural parish with an expanding population but nowhere to develop and nurture a sense of community and build relationships with fellow neighbours. A new community hall would be a focal meeting point as there is nowhere to hold any community events or activities involving indoor space suitable for all members of the community in a safe environment.

The money received from the Big Lottery Awards for All fund will make so much difference to the success of this project; we can't thank the Big Lottery enough for their support. It will allow the project to assess resident's needs, aspirations and concerns for a new community hall build in the form of a residents survey and, depending on the findings, experts will then carry out the necessary surveys, planning research and support, legal formalities and develop a new project plan to be ready for the next stage; to raise fund for a new community hall build!

Paul Tyler said he was thrilled at the support within the parish by volunteers, surrounding villages and businesses together with the generosity of time freely given to the project so far. The project committee members, Liz Rider, Hannah Holdgate, District Councillor Rob Steer, Lindsey Stewart and Lisette Granados have worked relentlessly to come this far into the project so quickly. It proves that volunteers can really make things happen!

The Community Hall Project will be working on the resident's survey into the new year with the help of Devon Communities Together 'Catalyst Services' to be delivered to residents and collected in Spring 2015. Further information about the project, how to get involved including volunteer and committee vacancies can be found on the community website www.avonwicknorthhuish.co.uk

The Big Lottery Fund is responsible for giving out 40% of the money raised for good causes by the National Lottery. The Fund is committed to bringing real improvements to communities and the lives of people most in need and has been rolling out grants to health, education, environment and charitable causes across the UK. Since its inception in 2004 it has awarded close to £6bn. 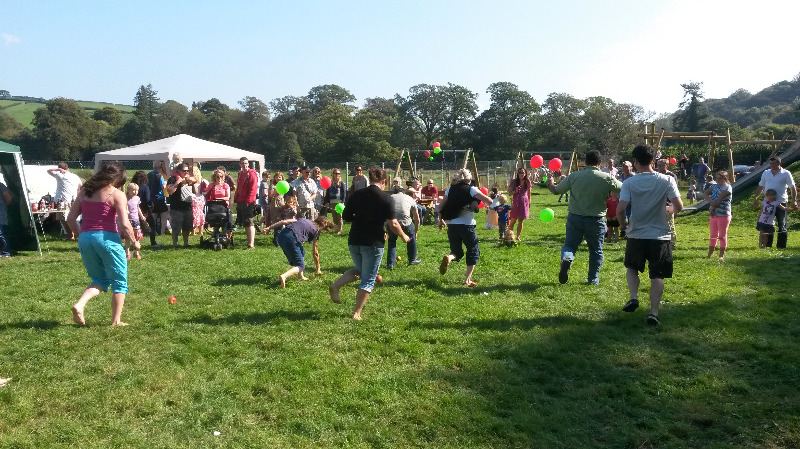 The first ever Apple Pie Fair took place in Avonwick on Sunday 21st September, on land designated for a new community hall project, attracting more than 300 people from the local parish and surrounding areas.

Events took place to suit all ages from apple bobbing and pressing to apple and spoon races, alongside the flagship apple pie bake off competition. The best in show went to novice bakers Dan and Sam, who had reportedly never before prepared pastry let alone baked a whole pie.

Additional prize winning producers included Diana Tyler for her sweet preserve Seville Marmalade and Lorna Sedman for her savoury runner bean pickle. A challenge to guess the weight of the giant apple pie, baked by The Turtley Cornmill, was most accurately judged by Richard Blackwell. Many of the winners donated their prize winnings to the project.

A big ideas apple for a new community hall cut to the core of what the event was all about. Suggestions ranged from a venue to hold food and music festivals, to pilates classes and kids' clubs. The next stage of the consultation process in the Community Hall Project is a residents' survey, which will be circulated soon.

As the day drew to a close, a ceremonious apple tree courtesy of Adam's Apples was planted by Chairman Paul Tyler and South Hams District Councillor Robert Vint who donated funds from his Locality Budget to help pay for the event. Rounding off the occasion, a special performance took place from a local wassail choir, including members from the Wild Harmony group, singing apple-themed songs.

Paul Tyler, Chairman of the Avonwick North Huish Community Hall Project said: "Many people attending the event said how wonderful it was that the community had all come together in support of the very first Apple Pie Fair. The first of many we hope!

"It was a real success, since the intention was to provide a fun, community-building event that would help raise awareness of the Avonwick and North Huish Community Hall Project.

"The suggestions left on our "Big Ideas Apple" prove that the community is in support of this project.Â

Various refreshments were provided courtesy of local businesses The Avon Inn and the Avonwick Shop, along with local meat produce for the barbeque from ?

The event was sponsored by Luscombe Maye Estate Agents who provided enough balloons to fill the roof of the marquee. The Community Council of Devon were in attendance, who are providing the committee with mentoring and support to help get the project off the ground.

For more information, news and up to date event details visit www.avonwicknorthhuish.co.uk 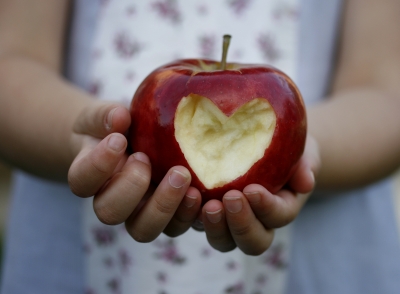 Avonwick, South Devon, is set to stage an Apple Pie Fair on 21st September on land designated for a new community hall project.

Events planned for the day include apple juice pressing, apple and spoon race, guess the weight of a giant apple pie courtesy of The Turtley Cornmill, the longest apple peel, a big ideas apple for a new community hall, as well as various stalls and a raffle.

A special performance from a local group of Wassail singers will add to the entertainment.

A beer, cider and Pimms bar will be provided by the Avon Inn and a fruit juice bar courtesy of the Avonwick Shop. Pure Dartmoor Water will be serving free glasses of water.

As well as being a great seasonal event for the local area, organisers hope that it will help to raise awareness for the Avonwick and North Huish Community Hall Project, which needs to gain local interest and support if it is to make successful bids (assisted by the Community Council of Devon) to fund the construction of a new hall.

Paul Tyler, Chairman of the Avonwick North Huish Community Hall Project said: "The Apple Pie Fair is a fun event that's open to everyone to attend from the North Huish Parish, people living in the surrounding areas and visitors. The event and the project it supports, offers a real chance to help build a strong local community."

David Kinross from the Community Council of Devon said: "Work is underway with the community to develop evidence to apply for funding, and we are optimistic that the resources will be secured for the community hall with the aim of providing facilities that people will benefit from for generations to come."

A Facebook page has been launched to support the community website and the Community Hall Project, providing links to all the latest news while offering a platform for locals and visitors to share their views.

For more information, news and up to date event details visit www.avonwicknorthhuish.co.uk

A NEW VILLLAGE HALL FOR AVONWICK AND NORTH HUISH?

On the evening of 23rd June, a Consultation meeting was held in Avonwick for residents to consider a new Village Hall which could be built on the land recently made available to the villages by Linden Homes.

Invitations to attend the meeting were delivered to all 200+ houses in Avonwick and North Huish and on the night nearly 50 people gathered in the marquee in the garden of the Avon Inn. David Kinross from the Community Council of Devon outlined the process of funding, building and running a Village Hall and two residents from Rattery described how their hall was built and how popular and busy it is now. After refreshments those present were invited to write down their views and ideas and the marquee was a buzz of discussion and Post-It notes! Volunteers came forward with offers to join the 4 people currently on the Village Hall Committee, and to help with relevant skills.

Devon County Councillor Robert Vint attended the meeting and told the Committee that he had secured Locality Funding to help with the costs of the Consultation Evening and other set up costs.

Following this meeting a paper survey will be delivered to, and collected from, each house in the area so that as many views as possible can be recorded. It is planned to have another Villages community event with a social evening and barbeque around September time, as part of the project.